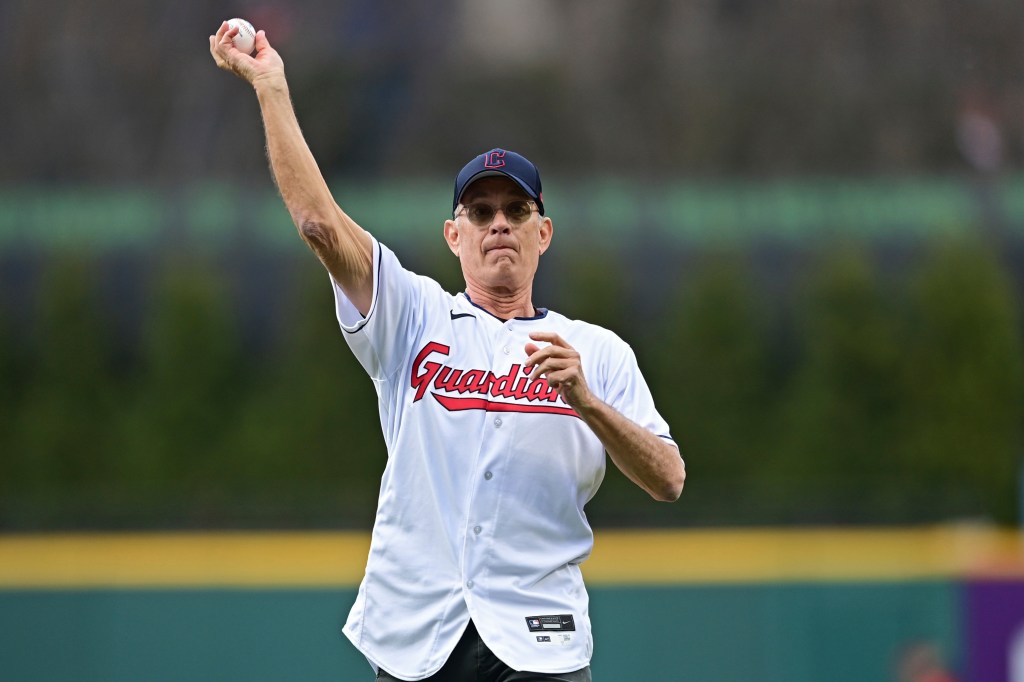 It’s not too often a costar out-funnies Tom Hanks, but it happened tonight when the actor threw out the ceremonial first pitch at the home opener for MLB’s Cleveland Guardians.

As he was introduced Hanks walked out to the mound carrying what appeared to be Wilson, his volleyball companion in Robert Zemeckis’ Castaway. The actor placed the bloody-faced ball on the mound beside him and started rubbing up the ball, but Wilson had other ideas.

“There goes Wilson,” said one announcer as the ball suddenly rolled about 10 feet to the right of the frame.

“It’s windy today,” replied the other as Hanks gamely jogged over, grabbed the ball and returned it to the mound.

Hanks went into his routine again and, sure enough, Wilson took off, this time rolling about 30 feet right then circling back near Hanks feet as the actor pointed to the spot where he wanted the ball to stop.

“Maybe it’s remote controlled,” said one announcer as the reality that this was a gag set in.

“It’s gotta be,” answered the other.

Finally, Hanks just went ahead and threw the pitch as the ball rolled around in front of him.

So how was the throw? Given the extremely low bar that’s been set by celebrities throwing out first pitches. It wasn’t terrible. Though he threw from in front of the rubber, Hanks’ toss made it to the vicinity of home plate.

According one announcer, Hanks’ association with Cleveland was formed in the when he began acting. In the 1970s, the two-time Oscar winner got his start at the local Great Lakes Theater Festival.

Previous articleUkraine’s PM, Finance Officials To Visit US Next Week Amid War Against Russia
Next articleKaley Cuoco Says Kate Hudson Beat Her Out For ‘Knives Out’ Sequel – Deadline
LocalTakSabse Tez