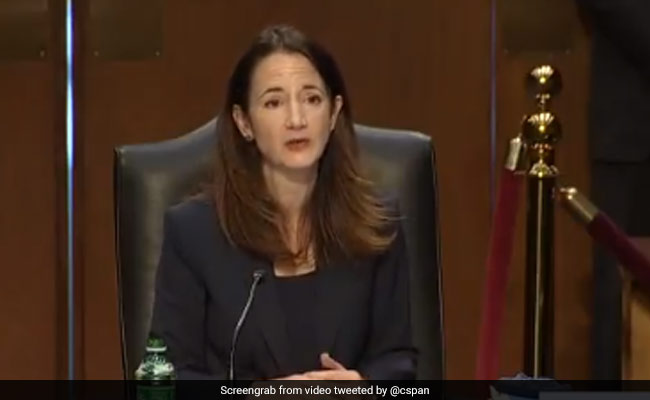 China is increasingly becoming a near-peer competitor of the US, posing challenges in multiple domains, while pushing to revise global norms in ways that favour the authoritarian Chinese system, a top American intelligence officer has told lawmakers.

Director of National Intelligence Avril Haines on Wednesday briefed members of the Senate Select Committee on Intelligence on the worldwide threat assessment of the US.

“China increasingly is a near-peer competitor, challenging the United States in multiple areas while pushing to revise global norms in ways that favour the authoritarian Chinese system,” she said.

China, she said, is employing a comprehensive approach to demonstrate its growing strength and compel regional neighbours to acquiesce to Beijing’s preferences, including its claims over disputed territory and assertions of sovereignty over Taiwan.

“It also has substantial cyber capabilities that, if deployed at a minimum, can cause localised temporary disruptions to critical infrastructure inside the United States,” Avril Haines said.

Russia, Iran and North Korea are the other three countries that pose threats to the United States, she said.

At the same time regional conflicts continue to fuel humanitarian crises, undermine stability and threaten US persons and interests.

“The fighting in Afghanistan, Iraq and Syria has a direct implication for U.S. forces, while tensions between nuclear-armed India and Pakistan remain a concern for the world. The iterate of violence between Israel and Iran, the activity of foreign powers in Libya and conflicts in other areas, including Africa and the Middle East, have the potential to escalate or spread,” she said.

“Asia has periodic upheavals, such as the Burmese military seizure of power in February. Latin America has contested elections. Violent popular protests are likely to continue to produce volatility. And Africa will continue to see ongoing marginalisation of some communities, ethnic conflict, and contentious elections,” she said.

Senator Mark Warner, Chairman of the Senate Committee, described the rise of China as a major challenge for the United States.

As China grows in power and stature, the CCP has sought to undercut the United States as the world’s leading technological power, he said.

“We see this in the reliance on both strategic investments and traditional espionage to acquire intellectual property, their use and export of surveillance technology to authoritarian regimes, and their modernization of traditional and asymmetric military capabilities, including in the space and cyber domains,” Warner said.

“When we look at development, for example, of 5G technology, we’ve seen the CCP act aggressively to influence international standard-setting bodies and invest in a national champion, Huawei, that threatens to dominate the worldwide telecommunications market,” Warner said.

“I fear that the CCP will develop a similar strategy to dominate the development of other emerging technologies, including AI, quantum computing, and BAU technology. In many ways, the IC is the only part of our overall enterprise that sees across all domains in this field, and I think we must be clear-eyed in assessing the threats posed by the CCP,” he added.

Senator Marco Rubio said that the United States made a mistake to not focus on both China’s capabilities and on its growing and intensifying efforts to involve and engage itself in the political environment in the United States.

“Different aims, perhaps, different tactics in some ways. But certainly, they have every capability that the Russians do, and more, in many cases. And they are certainly interested in molding public discourse and creating political pressure among creating pressure on political figures who they don’t like here in the United States,” he said.

FBI Director Christopher Wray told Senators that the investigating agency now has over 2,000 investigations that tie back to the Chinese government.

“And on the economic espionage investigation side alone, it’s about a 1,300 percent increase over the last several years. We’re opening a new investigation into China every 10 hours. And I can assure the committee, that”s not because our folks don”t have anything to do with their time,” he said.