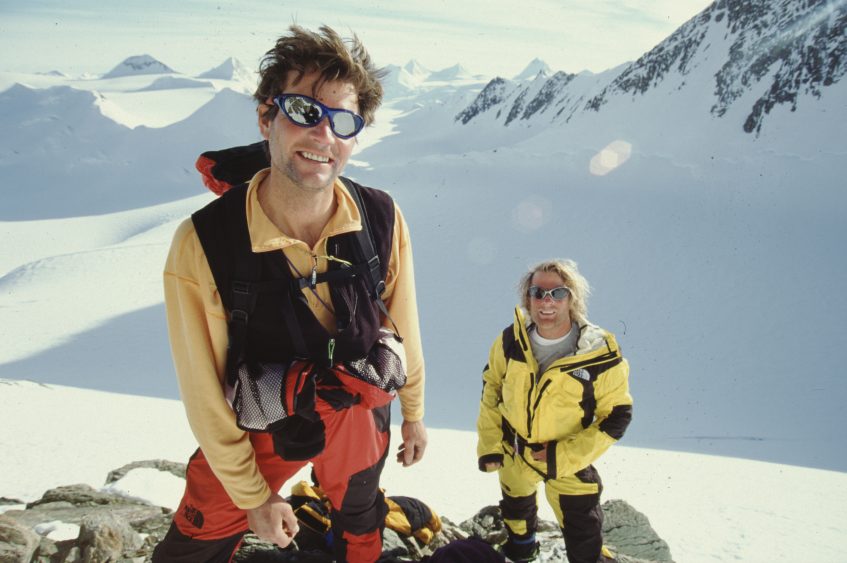 Filmmaker Max Lowe was just a kid when his father, the mountaineer Alex Lowe, was killed in an avalanche while climbing in the Tibetan Himalayas. It was a private family tragedy, and yet a public story—Lowe’s death made headlines around the world because he was considered perhaps the greatest mountain climber of his time.

The snows entombed Lowe and David Bridges, a 29-year-old cameraman who took part in the expedition organized by North Face, the recreation products company. Conrad Anker, Lowe’s best friend and fellow world-class climber, sustained injuries in the avalanche but survived.

In his new documentary Torn, Max Lowe shares the story of how his father’s death impacted his family, and how Anker came to play an increasingly central role in their lives. The National Geographic doc premiered at the Telluride Film Festival earlier this month before screening at the Camden International Film Festival in Maine.

Lowe calls showing the film to audiences “quite emotional, on a lot of different levels. Not only because of the content and the catharsis personally, but… hearing people’s stories about their own traumatic experiences in life, whatever they might be, it’s powerful stuff. It’s hard… but it’s why I tell the story at all.”

Alex Lowe tackled rock climbing and ice-climbing with equal gusto, achieving celebrity status in the world of mountaineering. His reputation was based not only on skill and incredible physical strength, but his magnetic personality. He simply lived for climbing and outdoor adventures. But unlike many climbers, he had a family: wife Jennifer, and young sons Max, Sam, and Isaac.

“I probably felt comfortable even thinking about the idea of making a film about our story because Alex started it off with his own work in the public space,” Lowe tells Deadline. “Our family has been in the public eye since I was a kid. Alex, as soon as he was off doing these high profile expeditions for North Face, there was camera teams that were coming to our house to interview him and documenting our lives and the fact that he had a family was part of his story.”

Among his many climbing feats, Alex summited Mt. Everest twice, and made “the first ascent of Rakekniven, a tall granite spire jutting above the vast ice of Queen Maud Land,” according to Alpinist magazine. Two days before his death, according to Alpinist.com, Lowe wrote, “I appreciate why I come to the mountains: not to conquer them, but to immerse myself in their incomprehensible immensity—so much bigger than us; to better comprehend humanity and patience balanced in harmony with the desire to push hard; to share what the hills offer; and to share it in the long term with good friends and ultimately with my own sons.”

When Alex was killed, Max was 10, Sam 7 and Isaac only 4. The film gently raises the question of whether embarking on such dangerous climbs was appropriate given Alex Lowe’s family commitments.

“As people, we have a hard time understanding other people’s motivations,” Max observes. “We see those people who do amazing things with their lives and look up to them for that, but this perspective—being the son of someone who gave their life to what they loved, both literally and figuratively, and then being someone myself who wants to live a life of passion—I’m mostly just trying to understand how Alex reconciled with that so I can find some more understanding of it for myself… There’s no answer at the end of the road, so to speak.”

That moral conundrum would have been subject enough for a documentary, but the story of Alex Lowe, his family and Conrad Anker takes another turn that occupies a major portion of the film. Anker, guilt-ridden over surviving the avalanche and vowing to play a positive role in the lives of Alex’s boys, became close to the Lowe family. As Anker spent more time with Jennifer and the kids, he and Jennifer developed romantic feelings for each other.

“In the aftermath of tragedy and shared grief, Conrad Anker and I found love,” Jennifer has written. “Two years after Alex died, we married and he adopted our sons. I fell in love with Alex’s best friend, perhaps because of the characteristics I loved in Alex. They both had a thirst for life in all of its finest forms, were passionate, exuberant and pursued knowledge and a diversity of experience in nature and the world.”

The younger boys, Sam and Isaac, took Lowe-Anker as their last names. Max kept his last name Lowe. Torn documents his struggle to accept the loss of his father and the emergence of Conrad as a surrogate father.

“I was old enough when Alex died to understand the gravity of it and to have an understanding of what his absence meant for me,” the director says “But I was also not old enough at all to understand the gravity of Conrad and my mom’s relationship following Alex’s death and I think that I’ve been struggling with, personally, since then that I never really acknowledged. And making this film has brought a lot for me, personally, out of the light as far as the things that I have taken on from my parents without knowing it.”

A major development for all of the family members occurred in 2016 when the bodies of Alex Lowe and David Bridges were unexpectedly discovered on Shishapangma in Tibet. Max, his brothers, his mom and stepdad Conrad traveled to Tibet to recover Alex’s body. Max says he was moved, “Seeing the fact that Conrad on that trip still struggles so deeply with his survivor’s guilt and imposter syndrome.”

Max’s brother Sam shot video of the retrieval of their father’s body and the ceremony that was held on the mountain to honor the fallen climbers. Jennifer and Conrad are interviewed in the documentary, as are Max’s siblings, Sam and Isaac. But the younger brothers appear ambivalent at best about sitting down in front of Max’s camera.

“My middle brother Sam is a very talented filmmaker in his own right… I asked him if he wanted to co-direct this film with me, because I saw a lot of potential for us in the process of making it and then also sharing that story with people but, yeah, he didn’t want to delve into that for himself,” Max says. “He’s just never really been quite as comfortable with embracing our family story as his own. Whereas, for whatever reason and maybe it’s because I knew Alex longer than he and our youngest brother Isaac did when I was a kid, but I always looked up to Alex and the fact that he inspired people in so many ways to the point where even to this day people will come up to me and tell me how he touched their lives in one way or another. And that, for me growing up was always something that I aspired to as well.”

With the film, Max steps out from his father’s shadow.

“Making Torn, for me,” he says. “was personally kind of a reconciliation with my struggle to find my own place within this larger story that has mostly been about Alex, and about Conrad and my mom.”