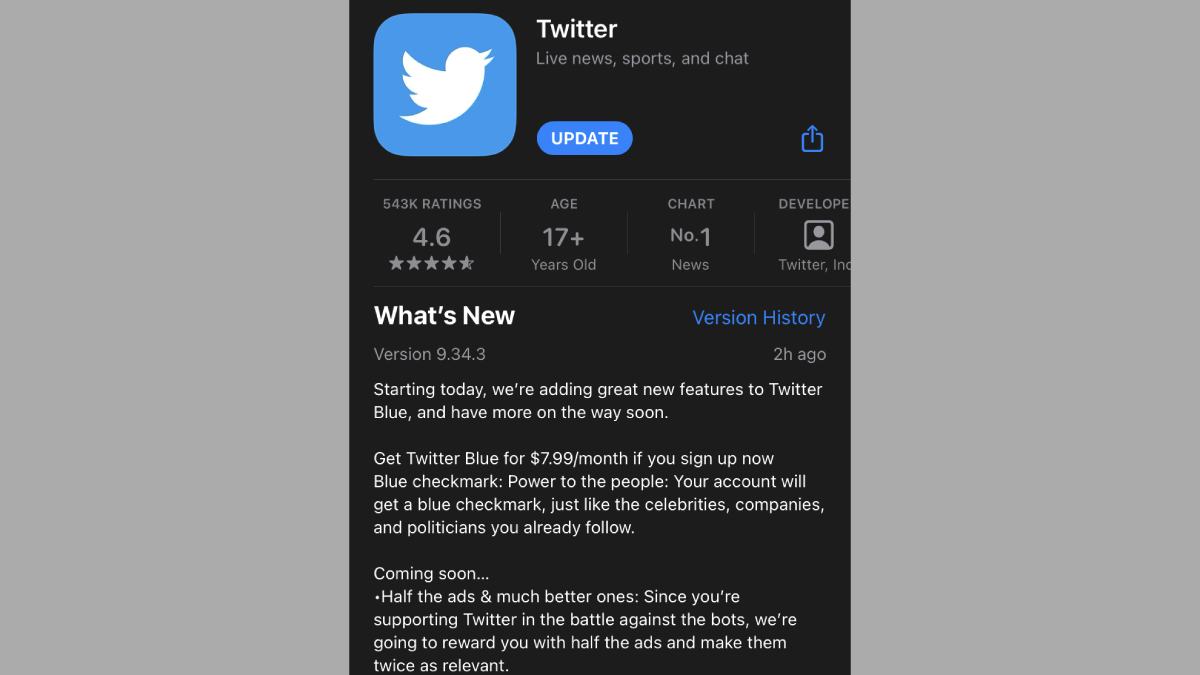 Twitter has pushed out an update for its iOS app which introduces the new revamped Twitter Blue subscription that new owner and CEO Elon Musk has been promoting through his own tweets. Most interestingly, Twitter Blue subscribers will automatically get a blue checkmark badge on their profiles, which used to be given only to the verified accounts of corporates, celebrities, and public figures. Now, the “blue tick” will be something Twitter users have to pay for. The price of Twitter Blue has risen to $7.99 per month in the US from $4.99, and Musk has indicated that this will be scaled to purchasing power in other countries. According to the iOS app update’s release notes, the new ‘Twitter Blue with verification’ will first be available in the US, UK, Australia, New Zealand, and Canada.

Other than the blue verification badge, Twitter Blue subscribers will see half as many ads, and the ones they do see will purportedly be twice as relevant to each user. The release notes also indicate that subscribers will be able to post longer videos and their content will be ranked higher in search results as well as reply threads and lists of mentions. On the other hand, the ability to read articles on participating sites ad-free has already been dropped as a Twitter Blue feature despite the price increase. Musk has also suggested that the ability to edit tweets will soon be available to everyone, as opposed to only Twitter Blue subscribers.

While the Twitter app update is now visible in the App Store, it appears as though these features might not be available to everyone yet. An account claiming to be that of a Twitter “early stage products” employee, though notably lacking a verification badge, tweeted that the new Blue subscription plan isn’t live yet, as tests are ongoing as changes are being pushed live in a rush to get it rolled out. Others have tweeted screenshots of the Twitter Blue sign-up page. It also isn’t clear yet when or whether the plan will roll out in other countries and users on other platforms will be able to sign up.

The new Blue isn’t live yet — the sprint to our launch continues but some folks may see us making updates because we are testing and pushing changes in real-time. The Twitter team is legendary. 🫡 New Blue… coming soon! https://t.co/ewTSTjx3t7

Twitter has not yet indicated what will happen to current Twitter Blue subscribers. It is however likely that everyone who currently has a verification badge but does not choose to pay the subscription fee will lose it. While the company characterises current and potential subscribers as “supporting Twitter in the battle against the bots”, this change will tip the balance of exposure on the platform in favour of those willing to pay for it and could also potentially make it harder to find authoritative sources of information.

The change to Twitter Blue is one of many things Musk has tweeted about. Most notably, he initially proposed a $20 fee (approximately Rs. 1,639) for the widely recognised verification tick. Although he says this is aimed at reducing spam on the platform and making it harder for bots to thrive, Musk has wasted no time in making dramatic changes to turn his investment around.

Twitter shipped its new Blue subscription for verification ahead of Musk’s Monday deadline given to employees. I updated and verified accounts are now the first tab of notifications. pic.twitter.com/xfTl3b3GYk

Ever since taking over the company and firing the previous CEO as well as the entire board of directors, Musk has been generating headlines. Twitter embarked on a massive cost-cutting and layoff spree this week, cutting an estimated 50 percent of all employees including entire teams and a significant portion of its Indian workforce. Musk has also reportedly demanded that all remaining remote employees report to an office, and brought several Tesla engineers and advisers from his other companies in to help overhaul Twitter’s business.