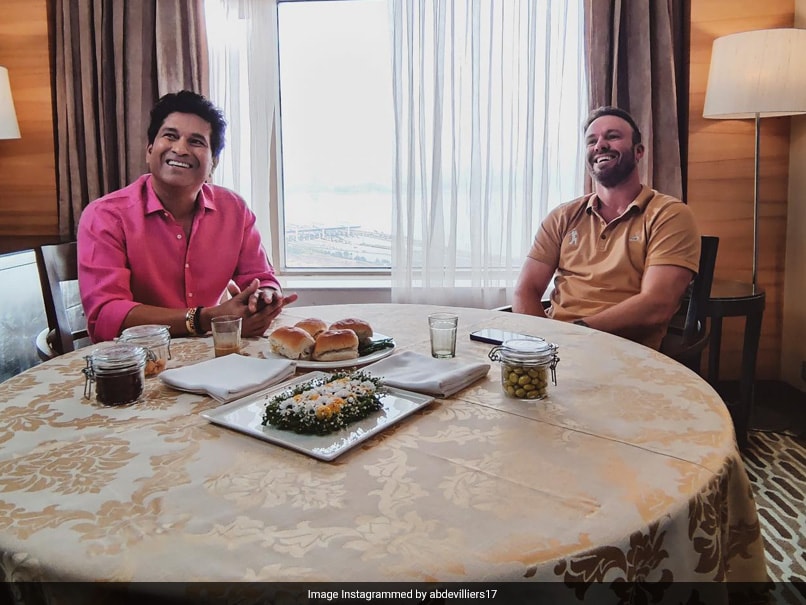 Former South Africa batting great AB de Villiers met legendary Indian cricketer Sachin Tendulkar on Monday. De Villiers took to Instagram to share some glimpses of his meeting with Sachin, who is someone he “looks upto”. “Bottled up with excitement as I wait to meet with @sachintendulkar . He’s always been someone I look up to. The way he carried himself on and off the field during his playing days was nothing short of incredible! Since his retirement nothing has changed and he still inspires millions around the world, including me,” said de Villiers in his Instagram post.

To this, Tendulkar responded on Instagram, “Back to you @abdevilliers17 The feeling is mutual my friend. Sitting in the adjacent room….all set to go… waiting for the umpires to walk on the field. See you soon!”

After his meeting, de Villiers shared his experience with his fans, saying that while interacting with Tendulkar, he “ended up just listening and taking it all in.”

“So I ended spending a few hours with this man today. Thought I was sort of gonna interview him, but ended up just listening and taking it all in. What an experience. Thanks for your time “Master Blaster” @sachintendulkar”,” said de Villiers in his post.

Though it is not yet clear that what was the reason for the meet and what will come out of it, the sight of these two cricketing greats made fans happy, who took to social media to respond to de Villiers’ post.

“Two Goats in a single frame! This Batting Duo would be Illegal in Cricket!,” commented a fan.

“Miss u both legend,” added another fan with a comment.

“Two legends in one frame,” read another comment by a fan.

Notably, de Villiers was in Bengaluru recently. His appearance raised speculations about his return to RCB in some capacity.

“I am here to chat with RCB guys for next years IPL,” de Villiers had said in a video posted by the franchise on November 3.

Both players also have an international cricket resume to be proud of.

de Villiers has also played 420 international matches, in which he has scored 20,014 runs at an average of 48.11. 47 centuries and 109 half-centuries have been scored by the batter with the best individual score of 278*.