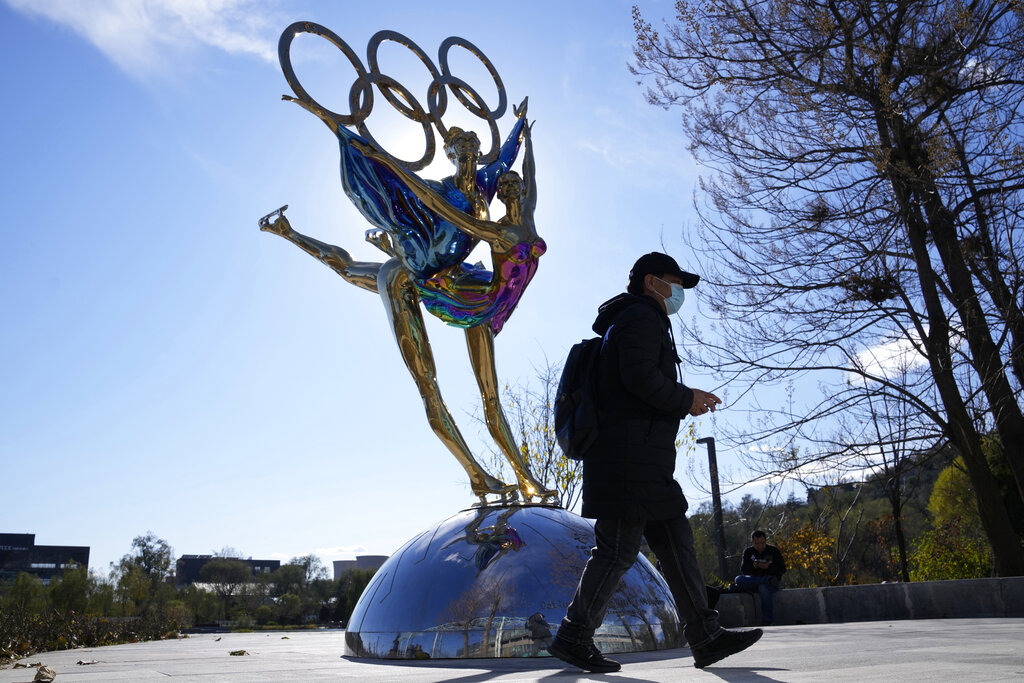 The U.S. will not send diplomats to the Winter Olympic Games in Beijings as a protest of human rights abuses, although U.S. athletes will still compete.

The White House announced the long-anticipated move on Monday.

“The Biden administration will not send any diplomatic or official representation to the Beijing 2022 Winter Olympics and Paralympic Games,” Psaki said, citing China’s “ongoing genocide and crimes against humanity” in Xinjiang.

The boycott does not include U.S. athletes, and she said that they will have their “100% support,” but “we will not be contributing to the fanfare of the games.”

“Standing up for human rights is in the DNA of Americans,” she said.

NBCUniversal has the rights to the games, and it was not immediately clear how the announcement would impact production plans, if at all.

Some lawmakers have urged the U.S., or even NBCUniversal, to take greater steps to pressure China.

Last summer, Sen. Rick Scott (R-FL) sent a letter to the network urging them to pressure the International Olympic Committee to relocate the games and even threaten not to air them. In response, a representative for the network wrote to him that “refusing to air the Games to a U.S. audience would only hurt Americans: Team USA Olympians and Paralympians, many of whom have trained for much of their lives to compete in a single Games, who would be denied the opportunity to shine in front of family, friends and fans; and the U.S. audience, who would be deprived of the opportunity to cheer on and take pride in the athletes who represent our country.”

In September, a coalition of human rights groups called on NBC and other networks to “cancel your plans to broadcast the Beijing 2022 Olympic Games, or risk being forever tainted by your partnership with China’s ‘Genocide Games.’ Genocide must be a red line that cannot be crossed, no matter the cost.” Mandie Mckeown of the International Tibet Network said that they have not received any response to the letter.

Last month, Sen. Tom Cotton (R-AR) called for a full boycott of the games, and called the Biden administration’s action a “half measure.”

If anything, the diplomatic boycott will increase scrutiny of NBCU’s coverage of the games, as lawmakers are wary of giving the Chinese government a platform of pageantry and spectacle given the abuses against Uyghur community in Xinjiang. There also have been concerns over new limits on free speech in Hong Kong.

Sen. Bob Menendez (D-NJ), the chairman of the Senate Foreign Relations Committee, said in a statement that “this boycott is a necessary step to demonstrate our unwavering commitment to human rights in the face of the Chinese government’s unconscionable abuses.”

When China hosted the Summer Games in 2008, there also were calls for a full boycott due to Beijing’s inaction in ending the human rights abuses in the Darfur region of Sudan. Steven Spielberg withdrew as artistic adviser to the games.

The International Olympic Committee also issued a statement on the U.S. boycott. “The presence of government officials and diplomats is a purely political decision for each government, which the IOC in its political neutrality fully respects. At the same time, this announcement also makes clear that the Olympic Games and the participation of the athletes are beyond politics, and we welcome this.”

In 2014, NBCUniversal paid $7.7 billion for the rights to the seven Olympic Games from 2021 to 2032. Its carriage of the Summer Games in Tokyo, delayed to last summer because of Covid-19, saw primetime viewership plummet. The Summer Games in 2024 will be in Paris, followed by Los Angeles in 2028 and Brisbane in 2032. After Beijing, the next Winter Games is scheduled for Milan and Cortina in 2026. No host city has been selected yet for 2030.