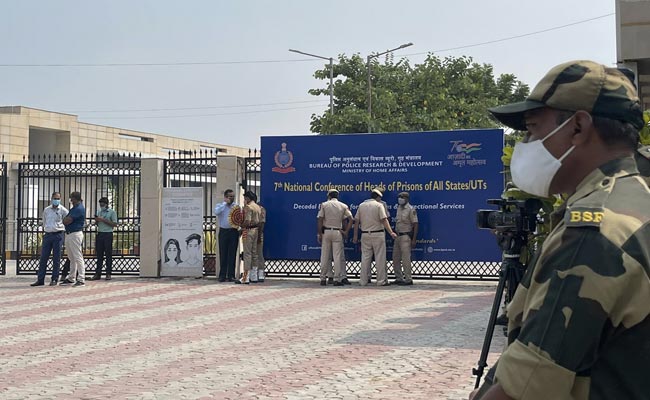 Union Minister Ajay Mishra – whose son Ashish has not been arrested despite being named in a murder case connected with the death of eight people at Uttar Pradesh’s Lakhimpur Kheri on Sunday – attended a national conference of prison officials on Thursday morning.

The media, earlier invited to cover the event, was not allowed in. The invitation was withdrawn over concerns reporters could press Mr Mishra on the delayed arrest of his son.

Ashish Mishra has been accused of murder and negligence in a FIR filed by UP Police.

However, the authorities have yet to arrest or question him.

Yesterday UP Police’s Additional Director-General, Prashant Kumar, told NDTV “no one will be spared… Technical evidence is permanent. It cannot be influenced.”

On Tuesday a top state police official told NDTV the delay was because the force is “busy with negotiations with farmers and then with postmortems and then with getting the cremations done”.

Asked if the delay could be linked to the accused’s obvious connections, SN Sabat (ADGP, Lucknow Zone) said: “Attitude of the police is towards the victim and not the accused.”

Ajay Mishra, who is the junior Home Minister and oversees law and order, and policing issues, for the country, has also remained defiant in the face of calls for his resignation.

He met his boss, Home Minister Amit Shah, yesterday, after which government sources ruled out any chance of him quitting. Speaking to NDTV earlier, he denied pressure to step down and asked: “Why would I [resign]? There is no pressure on us, We will investigate this…”

The opposition is firm in its demand Mr Mishra resign so as to ensure an “unbiased investigation”.

“Justice is a right in a democracy… The Union Minister needs to resign to ensure an unbiased investigation…” Priyanka Gandhi Vadra said yesterday after meeting the families of those killed.

Ms Gandhi Vadra, who was arrested (without a legal notice, she alleged) for two days while trying to visit the families, also questioned how she could be detained but a murder accused remain free.

Both Ajay Mishra and Ashish Mishra have denied all charges, and said they were not at the scene of the horrific incident, which saw a SUV at high speed ram into farmers holding a peaceful protest.

Mr Mishra told NDTV that the car belonged to his family but neither he nor his son were present.

Ashish Mishra told NDTV: “I was not in the car… was at my paternal home in Banwirpur where a wrestling match was being organised. I was there from the morning till the end of the event”.

Eight people, including four farmers, died at Lakhimpur Kheri on Sunday as violence erupted ahead of a visit by Mr Mishra and UP Deputy Chief Minister Keshav Prasad Maurya.

The other four were people in the cars; they were part of a convoy of BJP workers who had come to welcome Mr Maurya and were attacked after allegedly running over the protesting farmers.