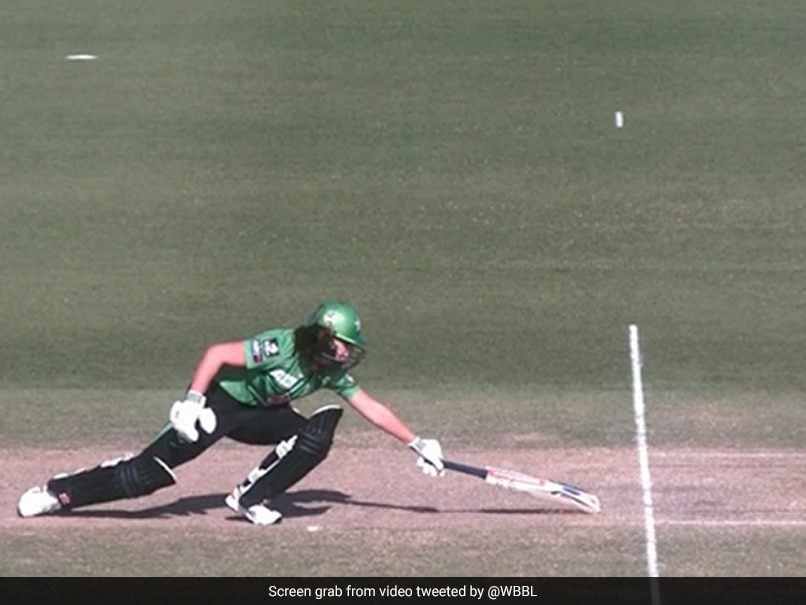 Glimpse of the run out by Sophie Ecclestone© Twitter

England’s Sophie Ecclestone turned heads in a Women’s Big Bash League recently when she effected a bizarre run out for Sydney Sixers against Melbourne Stars. Chasing a 148-run target, the Stars were at 101/5 in the 17th over when left-arm spinner Sophie Ecclestone got compatriot Tess Flintoff run out in a bizarre fashion. Flintoff stepped out on the fourth ball of the over, but could not connect. Ecclestone grabbed the ball off her own bowling, and threw it towards the stumps at the striker’s end. It was a direct throw and Flintoff was out.

“Ya kidding. Unreal from Sophie Ecclestone #WBBL08,” WBBL posted on its social media handles along with the video of the run out.

Watch: “Unreal” Run Out By Sophie Ecclestone in Women’s BBL

The Women’s Big Bash league is a hugely popular competition in Australia. It was a pioneer in women’s T20 franchise leagues around the world. Now, Women’s Indian Premier League is also going to be held. The much-awaited inaugural edition of Women’s IPL will have five teams and is set to take place in March 2023 before the start of men’s IPL.

As per a BCCI note accessed by PTI, the tournament will feature 20 league games with teams to play each other twice. The table toppers will get a direct entry into the final, while the second and third place teams will battle out in the Eliminator. Each team can have no more than five overseas cricketers in the playing eleven.

“To have a well balance of domestic & international players and to have competitive teams, it has been tentatively decided to have five teams for WIPL. Each team can comprise maximum of eighteen players where no team can have more than six overseas players. Further, no more than five overseas players – four from Full Members of the ICC and one from the Associate Members of the ICC – can be part of the playing XI of each team,” read the BCCI note.