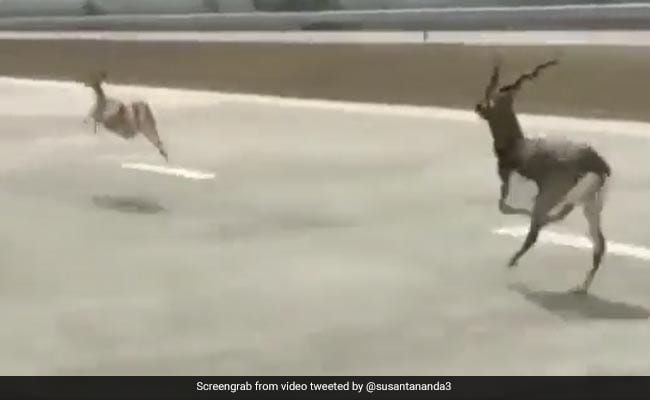 A video of an unknown vehicle chasing blackbucks in the middle of a highway has surfaced online.

Shared by Indian Forest Service (IFS) officer Susanta Nanda on Twitter, the video shows two blackbucks chased by an unknown vehicle in broad daylight and in the middle of a highway road.

The exact location and other details of the video are yet to be known, however, Mr Nanda in the caption wrote, “Driving wild animals amount to hunting under Wildlife Protection Act, punishable with an imprisonment of 3 yrs, which may extend to 7 years”.

This driver must be crazy chasing black bucks in their own territory. Driving wild animals amount to hunting under Wildlife Protection Act, punishable with a imprisonment of 3 yrs,which may extend to 7 years.
Anyone knowing the details of the driver?
VC:⁦@MilindPariwakam⁩ pic.twitter.com/qmMIJ7vvML

“The driver must be crazy chasing blackbucks in their own territory,” said Mr Nanda, further asking, “Anyone knowing the details of the driver?”

Viral Video | Woman Falls Off Scooter In Middle Of Road, Wrongfully Blames Rider Behind Her

Internet users were quick to respond to the now-viral video. They criticised the inhumane act of the vehicle occupants and demanded action against them. Some users even suggested measures that could not be adopted by the concerned authorities to prevent wild animals from such types of atrocities.

One user said, “Blackbucks have been included as highly endangered species under the wildlife protection act of 1972. So the driver has to face stringent action if caught.” Another pointed out, “The background song seems to be from some central Maharashtra region.” A third user noted, “since these animals don’t have sweat glands, they can die of exhaustion if they run for too long. #cruelty to animals must stop.”

The video was initially shared by Milind Pariwakam. “Another instance of unsafe road building for humans and wildlife. Plus the person who took this video is guilty of the offense of hunting under the Wildlife (Protection) Act, 1972. He should not have chased the blackbucks,” he wrote while sharing the clip of the vehicle chasing the blackbucks.

Notably, this comes after Mr Pariwakam shared another horrifying video, which showed a leopard, after being hit by a vehicle, stuck under the bonnet of a car. The location where this incident took place is still not known. The clip also showed the wild beast fleeing the scene after being hit by a car on a highway.