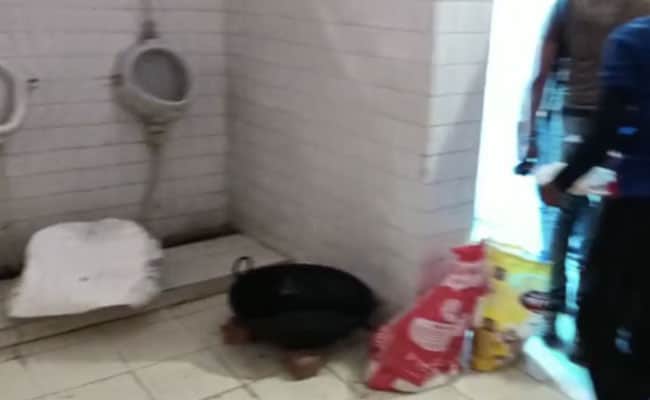 The food kept on the toilet floor near its gate

Some videos that show food being served to Uttar Pradesh kabaddi players in a toilet have gone viral on social media, leading to massive outrage and a ‘clarification’ from the state government.

The videos, which are now in wide circulation, were reportedly shot by some players on September 16 during an Under-17 state level kabaddi tournament for girls in Saharanpur.

In a 1-minute video, the camera pans to show urinals and wash basins in the frame and then pans back to show the rice plate kept on the toilet floor near its gate. The players can be seen taking the food and heading out of the toilet.

A second video shows workers picking up utensils and bringing them outside near the swimming pool where the food is being cooked.

The state government has suspended Saharanpur Sports Officer Animesh Saxena following the controversy over the viral videos. Mr Saxena had claimed that the food was kept in the ‘changing room’ (toilet) because of “space crunch”.

“It was not kept in the bathroom. Because it was raining, we made arrangements for food in the swimming pool area. The food was kept in the changing room next to the swimming pool. Some construction work is being done in the stadium and there was no other place to keep the food because of the rain” Mr Saxena had said earlier.

A probe has been ordered into the incident, officials said.

Several political parties have attacked the BJP over the viral videos for disrespecting the kabaddi players.

Y Sathish Reddy, social media convener of the Telangana Rashtra Samithi, tweeted, “Food served to kabaddi players in #UttarPradesh kept in toilet. Is this how #BJP respects the players? Shameful!

Food served to kabaddi players in #UttarPradesh kept in toilet. Is this how #BJP respects the players? Shameful! pic.twitter.com/SkxZjyQYza