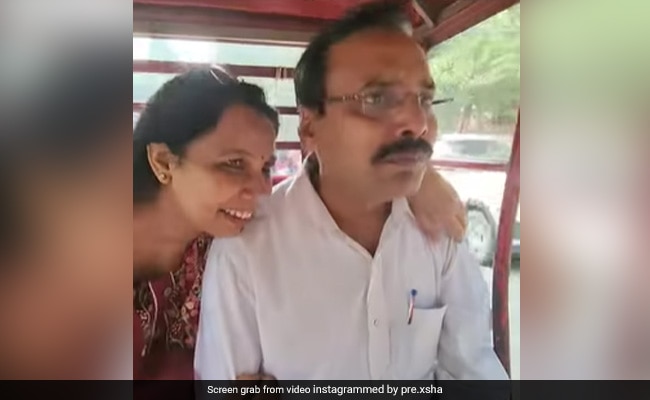 The video garnered more than eight million views and over 958,000 likes.

A heartwarming video of a father shedding tears while dropping his daughter to her new college is going viral on social media. The clip, shared a few days back on Instagram by a user named Preksha, garnered more than eight million views and over 958,000 likes.

“They were dropping me off at “our” dream destination Miranda House College, Delhi University. It was my first day so we were just exploring the campus and suddenly i noticed tears rolling down my father’s eyes,” Ms Preksha wrote in the caption of the post.

Further, Ms Preksha said, “He (Her father) was so overwhelmed with happiness and was on another level of emotions. The fact that his jigar ka tukda would be living far away from him was a bitter truth too. But those tears told me that all the sacrifices i made, all the hard work I did, each and everything I did to achieve this dream was all worth it in the end. All I can say is I can do anything to see your smiley faces and sparkling eyes! Thank you mumma papa! I love you”.

In the clip, Ms Preksha’s parents were seen dropping her off at her college, Delhi University’s Miranda House. While taking a tour of the campus, her father broke down into tears.

This touching moment left the internet emotional too. Celebrities including ‘Mismatched‘ actor Rohit Sharaf and famous web series actor Ayush Mehra also commented on the post. “So pure big hugssss to all three of you,” Mr Mehra wrote. “This is the best video on the internet. Love this so so much. Congratulations!!” said Mr Sharaf.

The official account of Netflix India too left a comment on the video. “The perfectly match soundtrack for such a beautiful moment. Big hugs to everyone on this journey,” it read.

“Too real. This is so beautiful I’m ugly crying at it.. Welcome to Miranda ya!,” commented one social media user. “Aww I literally had tears in my eyes after watching this,” said another.

A third wrote, “This is magical… welcome to the Miranda house…. U gonna love it and yes u should be proud of yourself for reaching till here”. “It made me emotional and reminded me of that day when i got into DU, Heartiest congratulations on getting into Miranda,” added fourth.

The Moment When Cheetahs Were Released From Quarantine At Kuno