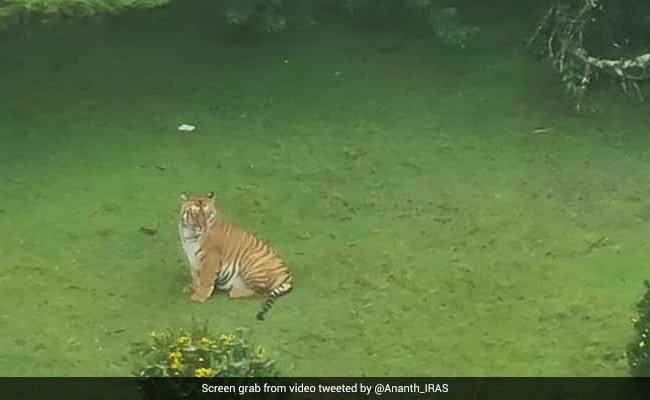 Many users were shocked to witness a tiger residing so close to human habitation.

The internet is full of videos of people spotting tigers, leopards and lions during safari at wildlife parks and sanctuaries. But have you ever imagined looking at this wild animal from a close range? In a video going viral on the internet, the big cat was spotted near the edge of the Golf Course in Ooty, Tamil Nadu.

An officer working with the Indian Railway Accounts Service, Ananth Rupanagudi took to Twitter to share the vidoes and pictures. He captioned the post as, “This was at the edge of the Golf course in Ooty – the big cat with its meal! #tiger #golfcourse.” One can spot the tiger’s moving around the dead cow. It seems that the tiger had already feasted on the dead cow and is also seen dragging the killed prey.

This was at the edge of the Golf course in Ooty – the big cat with its meal! 😳 #tiger#golfcoursepic.twitter.com/ZycFKSjk7f

The post has amassed over 1900 likes. Many users were shocked to witness a tiger residing so close to human habitation.

One user commented, “I think tigers must be careful when humans play there. We have encroached their living space for our entertainment! (Not a troll, but a fact about us!)”

“Geez, is this a golf course in the middle of a pristine forest? Otherwise you don’t see tigers in the city except in zoos, it’s dangerous, both for the staff and the people playing, and if it comes out when you’re not careful it’s going to cause some accidents,” said another user.

“OMG. I have played on this course. Not so lucky to spot such a magnificent animal,” commented another person.

“Sad. Obvious signs of humans encroaching too far into erstwhile forest. Attacking cattle is the first sign of tigers’ (usually younger, not dominant) turn towards man-eating,” added a fourth user.

Another user said, “They are not infiltrators, we are. we acquired their land.”

Navya Nanda To NDTV On Her Approach Of Dealing With Trolls: “With A Pinch Of Salt”