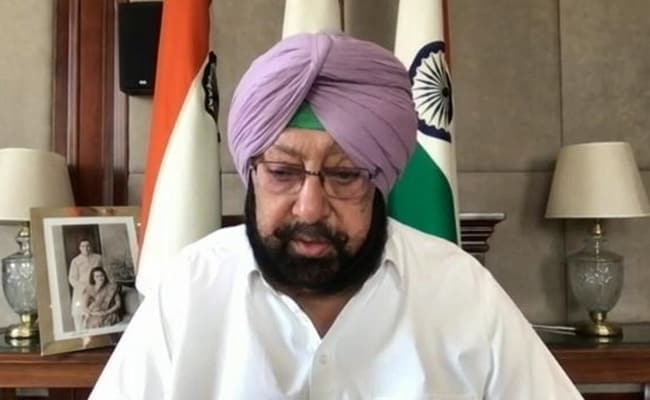 Punjab Chief Minister Amarinder Singh today urged people to follow the government-mandated Covid protocols – such as wearing masks and maintaining social distancing – while insisting that “our objective is not to harass people with restrictions but to protect them”. The 79-year-old Congress leader also sounded an alarm over coronavirus mutations as he said “younger people are getting affected” amid the fresh Covid surge. He yet again repeated his appeal to the centre to widen the vaccine coverage and slammed political leaders for leading election campaign rallies and setting a wrong example.

“This is a national crisis for God’s sake. This is a war against virus. The war is against an invisible enemy. Punjab’s brand ambassador for Covid – Sonu Sood – has also tested positive for Covid today. We all have to be careful because this can get out of control,” the Punjab Chief Minister underlined while speaking at NDTV ‘s Solutions Summit.

Distressing reports have come to fore from across the country on shortage of medical oxygen for Covid patients. Punjab has not yet faced such an issue, the Chief Minister said but he added, “Four locations in our state were cleared for setting up oxygen plants. But the final go-ahead from the centre is awaited since last year. Just yesterday, I wrote to Union Minister Piyush Goyal about this. This is a problem.”

Is lockdown a solution to break the chain of transmission? Answering the question, Amarinder Singh said: “Punjab’s economy suffered last time when we had a lockdown in Ludhiana. We had to arrange 400 trains to send people to Madhya Pradesh, Bihar, Jharkhand and other places. However, it’s needless to say that some checks are required whether in malls, restaurants, or cinema halls. Our objective is not to harass people but to protect them. So we have done all that’s possible with minimum restrictions.”

Hit by the second Covid wave, India has been witnessing a worrying surge in infections; 2.34 lakh cases in the last 24 hours took the caseload to 1.45 crore total infections. Punjab is one of the 10 states that reported 86 per cent of deaths in the last 24 hours, according to the government data. The state has recorded 2,90,707 cases so far.

The situation in Punjab is not as “as bad as other states”, the Chief Minister underlined and made a sincere appeal to the people to not delay testing if they experience symptoms. This is acting as a roadblock in the fight against the pandemic, he insisted. “Testing is very important and so is going to hospital at the right time to break the chain of transmission. Higher the testing, more the number of infections. We might have reported higher number of cases because we tested more people,” Amarinder Singh said.

Amid the fresh surge in cases, young people and rural areas are getting affected, he pointed out. “This new strain – UK strain – is affecting young people. I am also worried that the new wave has hit the rural regions, which were largely protected till last year,” the 79-year-old Congress leader said.

The Post Graduate Institute of Medical Education & Research, Chandigarh has found cases that show the virus has mutated further, he said. “This virus is mutating at a fast rate. It’s no longer the UK strain. It has mutated further.”

Answering a question on genome sequencing, he said: “Fortunately, the current lot of vaccines are covering mutants. But problems may arise if there are mutations that can not be covered by vaccines. Also, states should be left to decide on vaccine coverage depending on the spike in cases.”

Has the vaccine coverage issue been mishandled? Answering the question, he slammed the centre and underscored: “It’s not just about ramping up vaccine production, what was the point of gifting 5 crore doses to other countries?”

On political leaders campaigning amid surge in infections, Captain Amarinder Singh said: “We have banned political rallies till April 30. We will extend that, if needed. What’s the point of political leaders setting a wrong example?”