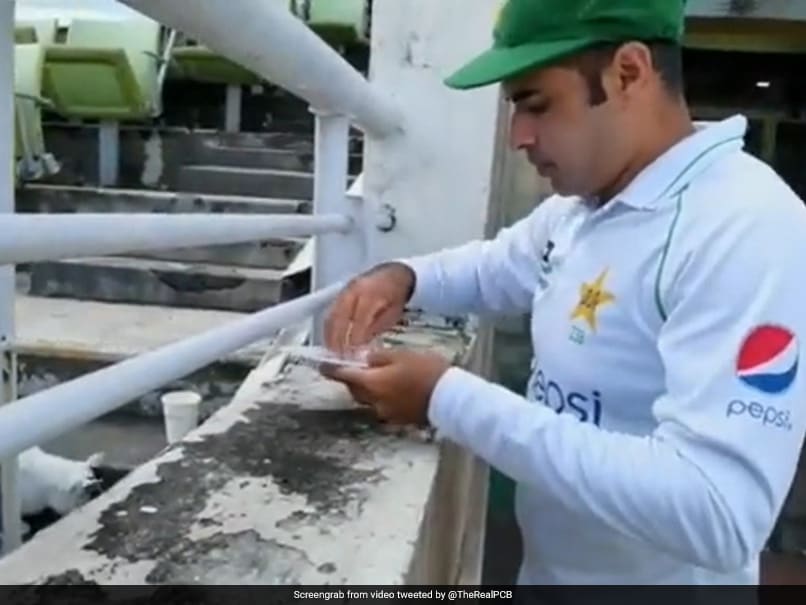 Pakistan’s Abid Ali was seen feeding a cat during the second Test against Bangladesh.© Twitter

Pakistan had an enjoyable stay in Bangladesh in their recently concluded tour as they cruised to comfortable victories in the T20I and Test series. After sweeping the three-match T20I series 3-0, Pakistan completed a 2-0 Test series win over the hosts on Wednesday with a win by an innings and eight runs in the second Test at the Sher-e Bangla National Cricket Stadium in Mirpur. While the visitors’ success on the field was the talk of the town, Pakistan batter Abid Ali also grabbed some headlines with an act off the field.

During a lunch break, Abid was seen carrying a plate of food away from the dressing room and towards the stands. The Pakistan batter then fed a cat that was waiting near the stands.

The Pakistan Cricket Board (PCB) tweeted a video of the same with the caption: “It is not only the players who are taking lunch.”

It is not only the players who are taking lunch #BANvPAK pic.twitter.com/wZ0k3ErPZW

In the second Test in Mirpur, Pakistan dominated proceedings from the beginning and cruised to victory despite the match being affected by rain.

Pakistan declared the first innings at a total of 300/4, with skipper Babar Azam top-scoring with a knock of 76.

In response, Bangladesh collapsed in their first innings as Pakistan’s Sajid Khan shone with the ball.

Sajid picked eight wickets as the hosts were bowled out for a paltry total of 87.

Pakistan promptly enforced follow-on on the hosts and Bangladesh, despite some late resistance led by Shakib Al Hasan, were bowled out for a total of 205. Sajid was the pick of the bowlers again for Pakistan as he picked four wickets.