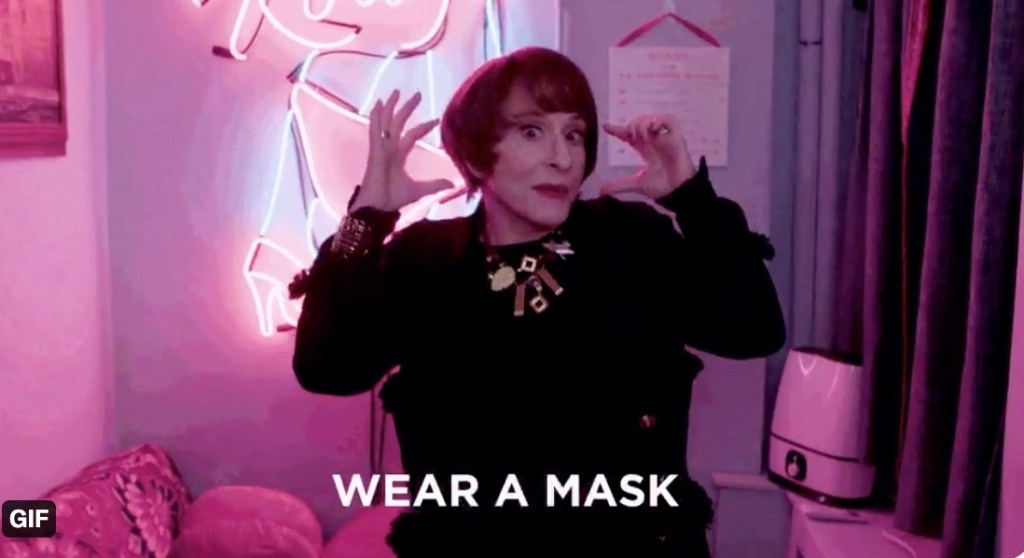 Patti LuPone and Company are doubling down on their message to Broadway theatergoers: Wear a mask.

Or get the f*ck out.

Ok, so the latter part goes unsaid in a new (and silent) PSA posted on the official Twitter account of the Tony-nominated Broadway musical revival, but LuPone wasn’t so reticent in an audience Q&A session following the show last night.

During the talkback session, hosted by The American Theatre Wing and open to the public, an angry LuPone repeatedly told two audience members to pull their masks over their noses. In audio and video of the incident, which went viral today, someone on stage – LuPone and her Company co-stars were participating – can be heard politely asking the audience members to “put the mask on, we worked so hard to get back.”

When the audience members refused, and one pointed out that LuPone and her co-stars weren’t masked, LuPone went Full Patti.

“Oh, do you want me to put a mask on, because I will. Your mask protects me so that I can perform,” she says, then increasing her volume, “Put your mask over your nose! That’s why you’re in the theater. That is the rule. If you don’t want to follow the rule, get the f*ck out!”

As the audience begins to applaud LuPone’s comments – someone yells “Thank you Patti!” – the two-time Tony winner continues, “I’m serious. Who do you think you are that you do not respect the people that are sitting around you?” When the defiant woman responds, “I pay your salary,” LuPone scoffs, “You pay my salary! Bullshit. Chris Harper pays my salary. Who do you think you are? Just put you mask over your nose. Oh my f*cking god.” (Harper is the lead producer of Company.)

Harper himself weighed in today, releasing the following statement: “Over the course of her storied career, Patti has always had an unshakable bond with the audience, and she takes their role as seriously as her own. She is also a fierce advocate for the entire theatrical workforce. We stand with Patti and support her efforts to keep our entire community — from patrons to ushers, cast to stage crew — safe and healthy so we can keep Broadway open.”

The Broadway League, representing the owners of 41 Broadway venues, announced last month that although audience members would no longer need to show proof of Covid vaccination (as of May), audiences are still required to mask up at least until June when the policy will be re-evaluated.

Patti LuPone putting an anti-masker in their place at a talkback after the show. Just follow the fucking rules and keep the performers safe pic.twitter.com/XWnkDxyoGo

Audio of Patti at the talk back tonight after an audience member refused to put their mask on after 2 minutes of her politely asking. Pardon my screaming.
Thank you @PattiLuPone ❤️ #MaskUp pic.twitter.com/ntciBr4sB4