West Side Story Review: Steven Spielberg’s Musical Sways To Its Own Beat 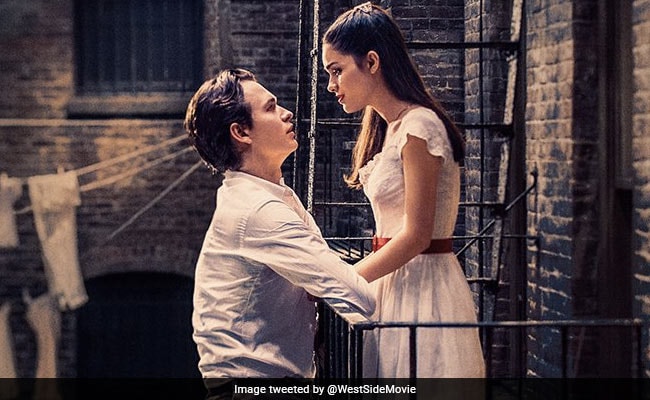 West Side Story Review: A promotional poster of the film. (Image courtesy: WestSideMovie )

A heartfelt homage to an American cinema classic, Steven Spielberg’s West Side Story is a fabulously lensed and robustly choreographed musical that stands apart from the original not merely in time and cinematic sensibility. Its heightened realism, contemporary resonance and fluidity of spatial dimensions and depth of field also palpably liberates it from what Jerome Robbins had conceived for stage and screen.

What is remarkable is that while the film sways to its own beat, it is absolutely true to the spirit and soul of the 1961 West Side Story. Spielberg and his collaborators, not the least of whom are the actors, combine felicitously to bring the production more in line with the rules of the cinema of our times, substantially, if not completely, jettisoning the stage musical principles that Robert Wise and Robbins abided by when they transported a Broadway show to the big screen.

The primary source of inspiration – William Shakespeare’s Romeo and Juliet – is intact in the film’s story of star-crossed lovers confronted with a world torn apart and on the brink of collapse, a world too divided for love to be able to conquer all. Spielberg gives the umpteenth rendition of the timeless tragedy a veneer of freshness by employing camera techniques and blocking methods that place it firmly in an evolved, fine-tuned cinematic construct.

West Side Story is marked by an acute sense of place and scale. It yanks the dances and the fights away from their stage moorings and renders them in a manner that is tangible, rooted in actual settings and emotionally rich and varied. No longer are the performers punching thin air as they would do on the stage. Their fights are ‘real’ and immersive.

The film does not go in for a full-fledged update of a beloved movie – it is largely faithful to the 1961 Robert Wise and Jerome Robbins version, barring minor tweaks in characterization and the altered placement of a few of the songs, which have been adapted by composer David Newman from Leonard Bernstein’s original score.

In a broad sense, Spielberg presents West Side Story exactly as what it was meant to be – a song and dance tragedy set in a milieu where two gangs divided along racial lines fight each other. He turns it into an extravaganza that induces nostalgia but delivers new highs in the process.

His focus is principally on capturing the psyches of the young men and women trapped in an unending cycle of violence and hopelessness and their self-destructive impulses as their homes and businesses are being steadily demolished to make way for a shiny new neighbourhood with beautiful apartments for the wealthy and the privileged. Isn’t that the plight of every marginalized community, no matter where it is in the world, that does not have control on the levers of power and are invariably deprived of a say in what shape their future should take?

Not only does West Side Story reflect the essence of Spielberg’s sensibilities as a filmmaker and a storyteller – the uncomplicated nature of the genre and the uncluttered, even simplistic, tale being narrated – give him the leeway to bring to the fore his proven panache for spectacle even as a tale set in the past speaks to us in the present with eloquence and in a miraculously relatable way.

The story plays out in a hell-hole where even the healing power of love faces the threat of being stymied under the weight of hatred. Maria (played brilliantly by big screen debutante Rachel Zegler, half-Polish, half-Colombian American actress) pleads with Tony (Ansel Elgort, charming and charismatic) to stay away from the gang that he co-founded with his best pal Riff (Mike Faist) before drifting away from it to start over. “I can’t talk my guys out of making trouble, says Tony. “Trouble is what they are made of.”

A date has been set for a deadly rumble and the hot-headed Bernardo (Cuban-Canadian actor David Alvarez) is determined to show who is boss here when the Jets, a gang of white boys, and the Sharks, a band of Puerto Ricans, face off in a contest to assert supremacy. The boxer’s anger has been aggravated by his disapproval for his younger sister Maria’s affair with Tony.

West Side Story is Spielberg’s first-ever musical but at no juncture of the film does it appear that he is working in a genre that he does not know inside out. One may ask: why is a new West Side Story needed at all? For one, the beloved 1961 movie feels a tad outdated today. That apart, large segments of at least two generations of moviegoers haven’t seen the original.

It might also be in order to compare the cinematography of the two films. Daniel L. Fapp’s Super Panavision 70 camerawork 60 years ago was mindful of the film’s theatrical derivation. Cinematographer Janusz Kaminski’s work in Spielberg’s West Side Story lends the film the sort of visual sweep and breadth that was beyond the ken of the makers of the first screen adaptation of the Broadway musical.

Scripted by Tony Kushner (co-screenwriter of Munich), Spielberg’s West Side Story, set in the Upper West Side of early 1950s New York City, alludes to the fault lines of American society – race tensions, police overreach, soci0-economic conflicts stemming from inequitable distribution of resources, lopsided models of development that do not take into account the interests of those being displaced – that have only grown more pronounced over the decades.

When Valentina, played by Rita Moreno (who was Anita in the 1961 film and one of its brightest sparks with her incredible singing and dancing), croons of the hope of finding a new way of living and a new way of forgiving, “someday, somewhere”, she echoes the sentiments of a whole wide world that is riven by hate, distrust and lopsided justice systems.

Natalie Wood’s Maria – the actress wasn’t Latino – is surpassed by the luminous Zegler, and Moreno’s performance in the old West Side Story is matched step for step by Arina DeBose, who plays Bernardo’s girlfriend. Zegler and Elgort form a wonderful team, as do DeBose and Alvarez.

Indeed, the actors are the ones who ensure that West Side Story never loses steam and saunters along nicely despite the fact that we know what lies ahead. They give the film its flounce and flair. And of course, Spielberg’s touch and Kaminski’s skills help catapult the exercise into modernity and infectious bursts of colour and energy.