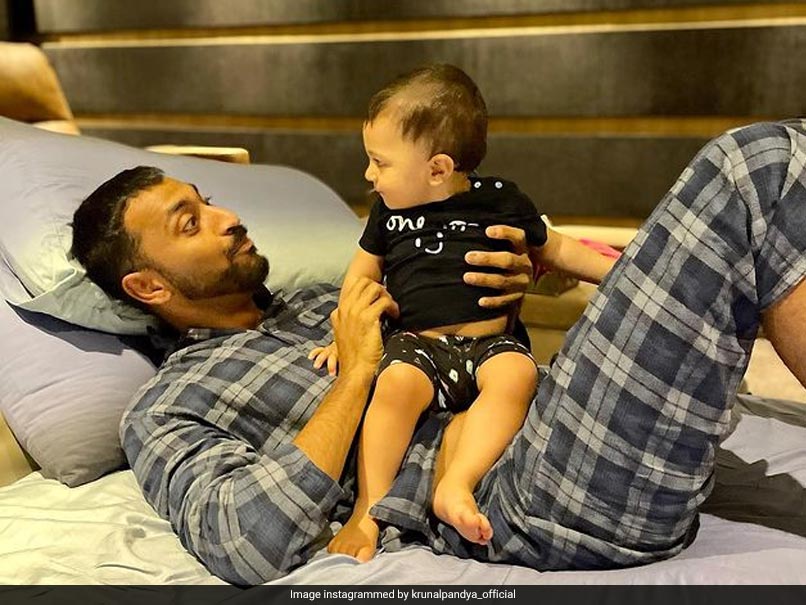 Away from field duties, Mumbai Indians (MI) all-rounder Krunal Pandya on Wednesday spent some quality time with his nephew Agastya. The 30-year-old also shared a short clip of his playtime with the little one on Instagram. Agastya is the son of Krunal’s younger brother Hardik Pandya and his partner Natasa Stankovic. “My ball of love,” Krunal wrote in the caption box of the video on the Facebook-owned platform. He also added a red-heart emoji in the caption.

Krunal’s wife Pankhuri Sharma was among the first few to like and comment on the post. “Awwlleeeee,” Pankhuri wrote. Natasa also dropped a bunch of red-heart emojis in the reply box.

The adorable footage of Krunal and his nephew starts with the toddler babbling in excitement. After that, Krunal can be heard asking Agastya to point towards KP in Mumbai Indians’ team poster.

On hearing the request, Agastya starts looking at the poster and after a brief search, he points towards KP [Krunal Pandya] in the photograph. The video concludes with Krunal praising Agastya for his efforts.

KP’s fans were also delighted to see Agastya’s adorable antics and flooded the comment space with red-heart and heart-eye emojis.

“Oh My God… Is not he the most adorable human being?” a fan wrote.

Another said, “I thought he will point at Kieron Pollard (KP).”

This fan joked that Bravo is not in the poster. “Lekin, Bravo to hai he nahi,” the user commented.

Krunal was last seen in action during Mumbai Indians (MI) match against Punjab Kings (PBKS) in the Indian Premier League (IPL) 2021 on Tuesday, which the defending champions won by six wickets.