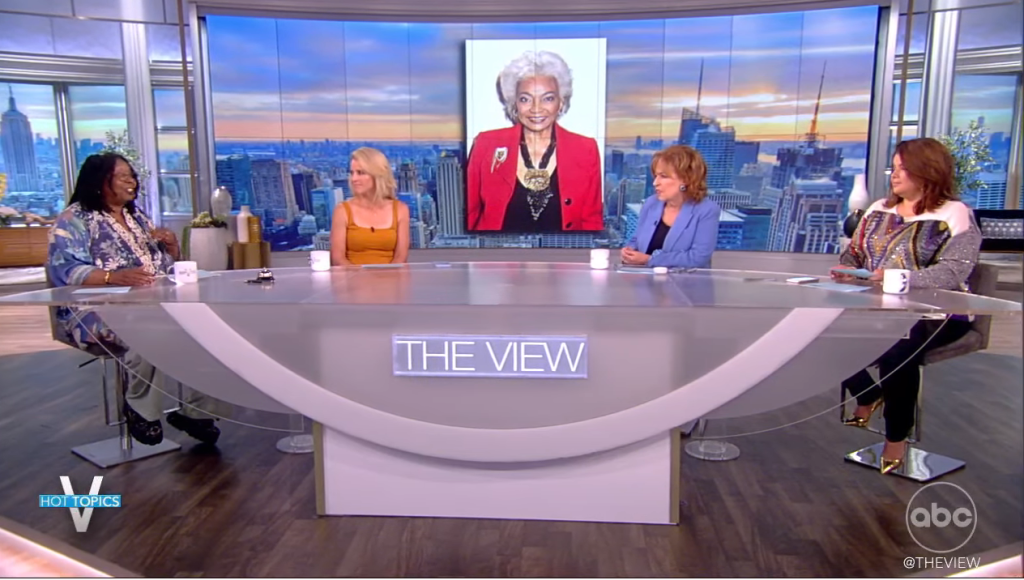 Whoopi Goldberg paid tribute on The View to the late Star Trek pioneer and fellow Trekkie, Nichelle Nichols, who died on July 31. Nichols was a groundbreaking actor in the science fiction genre who inspired the ABC talk show host in her own journey to space.

“A trailblazer, a heroine, and an extraordinary woman—someone who inspired millions and millions of people but inspired me,” Goldberg said of Nichols on Monday. “Nichelle was the first Black person I’d ever seen who made it to the future.”

Goldberg went on to say that Nichols was “the one beacon that said, ‘Yes, we’ll be there.’”

She continued, “It just made me feel like that was an amazing thing and she helped propel other women to go into space. She was extraordinary and I was lucky enough to spend time with her over the years. She was my friend and she will be missed.”

Nichols broke down barriers on the small screen with her portrayal of Lt. Nyota Uhura in the original Star Trek television series where she was a communications officer. The star shared with William Shatner one of the first interracial kisses on TV. Nichols went on to voice Lt. Uhura on Star Trek: The Animated Series and also appeared in the first 6 Star Trek films.

Goldberg played the role of Guinan in Star Trek: The Next Generation and recently reprised the character in the revival series Star Trek: Picard. The daytime TV host has always credited Nichols as her inspiration for getting into acting.

Watch Golberg’s emotional tribute on The View below.