Making sense of Adani group stocks is a dilemma on two aspects.

First, the group is diversified across so many sectors that it becomes difficult to understand which Adani group company will be the key beneficiary if the conglomerate makes a big announcement.

For instance, Adani Enterprises, the flagship company of the group, has exposure to sectors such as transport and logistics, energy & utility sectors, among others. The company is also leading a decarbonisation initiative of industries and mobility through Adani New Industries.

The other aspect is the meteoric rise of all Adani group stocks. Despite the group being saddled with debt, and all stocks from the group trading at astronomical valuations, they have seen a spectacular rise in their share price.

The sharp rally has also propelled Gautam Adani to claim the spot of second richest person in the world for a brief period.

On any given day, the group is making headlines for various reasons. Sometimes, it’s the group’s renewed focus in the green energy space or the group’s ambitious plans to produce the cheapest green hydrogen.

But for the past one week, companies from the group are making headlines for their recent decline.

On Monday last week, 3 October 2022, when the Indian share market fell over 1 per cent, Adani group stocks witnessed heavy selling and plunged up to 10 per cent. Many even hit lower circuits. 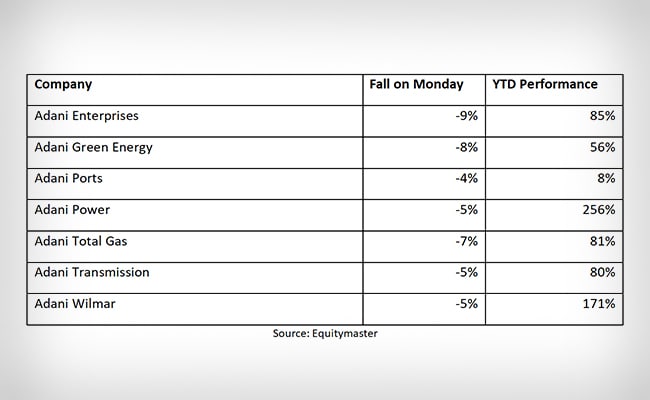 Let’s understand why this could have happened.

Why Adani Group Stocks Are Under Pressure

These stocks emerged as the best performing stocks since the March 2020 crash. Just to put things in perspective, consider this…

Even the worst performing Adani group stock – Adani Ports – outperformed the BSE Smallcap index and rallied 180% between March 2020 and June 2021.

The best performing group company – Adani Total Gas – managed to do in 1 year what the Sensex can perhaps achieve in 20. It went up an incredible 14.6x since the lows of March 2020.

All this was possible as the group cinched numerous deals and grew organically and inorganically.

But what has changed now? Why did these growth stocks come crashing down?

A simple answer to this is higher interest rates.

After years of easy money policies and low interest rates, inflation has started to rise. The US Fed has now embarked on a plan of series of interest rate hikes.

This in turn, could take the air out of growth stocks. We can already see the effect on Adani group companies.

Growth stocks are those spending big right now in order to get the benefits in the future. These companies may or may not be profitable now but hope to become so at some point down the line.

Cash flows for growth stocks are more far out in the future. So higher interest rates bring down the value of growth stocks.

That is why a rising interest rate environment like the current one is a bigger negative for growth stocks like Adani.

In such an environment, value stocks are considered over growth stocks.

Of course, there could be other reasons too as to why Adani stocks are falling.

The market could be factoring the high valuations of these companies. Take the top 5 most overvalued stocks in India and a couple of them will be from the Adani group for sure. 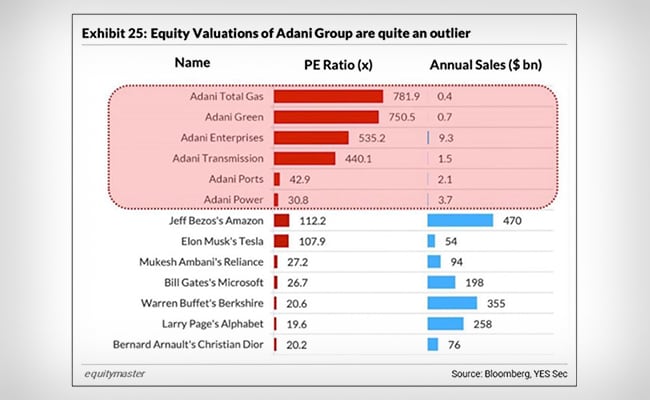 The sudden dip in Adani stocks can be a temporary effect. Or there could be a much bigger story here where higher interest rates bring down these stocks. No one knows for sure.

After plunging in the previous session, Adani group stocks recovered some ground yesterday in tandem with a sharp rise in benchmark indices.

This is the brilliant aspect of Adani group stocks. Investors are gung-ho about these companies as all of them have a very bright future.

Value investors would do well to stay away from all Adani stocks, at least for the time being, as the higher interest rate environment plays out.

Disclaimer: This article is for information purposes only. It is not a stock recommendation and should not be treated as such.

This article is syndicated from Equitymaster.com.